This blog post contains answers to the questions I’ve asked in my “PMTUD or not? Troubleshooting case” article. If you want to work through them yourself, do not read the following.

Ok, let’s start. First I want to say that these answers are just my thoughts, and if you don’t agree – welcome to have a discussion. Maybe I’ll learn a lot of new things, and this is always great.

Standalone question 1.  Why the first thing I did was the server side capture?

My answer consists of two parts.

The first part: as Jasper has commented, I wanted to check whether my (client) packets have got to NAS unchanged. A lot of middleboxes can alter different fields, particularly MSS value:

Not all parts of conversation are shown here, of course. Just the main point.

The second part: I wanted to be sure whether PMTUD process is actually happening or not. If we capture on receiving side, we don’t see PMTUD process, because it’s happening on the “server <–> some router on the path” part of the network! In case we are sending quite large requests, we would see PMTUD on our side, but this would be totally another independent process.

Questions based on PCAP.

Let’s start “from the opposite”.

“Spurious retransmission”. From dissector source code: “If the current seq + segment length is less than or equal to the receiver’s lastack, the packet contains duplicate data and may be considered spurious.”

So, spurious retransmission is the retransmission of the data already ACK’ed by the receiver. In our case we didn’t see any ACKs for large segments, because these large segments have been successfully dropped by the router. I want to say also that our perspective (the placement of capturing device) is very important in that case and we have much more chances to see “spurious retransmissions” if we capture on client-side rather than on server-side. Why? Let’s draw a diagram (I’m speaking about one-way data transfer now).

If we are capturing on client side:

Compare it with the next situation (the SAME situation but with another capture point actually):

Try to rearrange ACK and DATA packets on the second diagram for you to see DATA packet as “spurious retransmission” 😉   Not so easy, right? If the server has already seen ACK 201, it will not send DATA SEQ 101 packet anymore. Unless it’s completely crazy, or ACK packet has wrong IP (or any other) checksum and therefore are going to be discarded by server’s IP stack, or ACK packet is already received by the server, but is not processed yet (this is very tiny moment in term of time).

From dissector source code: “If there were >=2 duplicate ACKs in the reverse direction (there might be duplicate acks missing from the trace) and if this sequence number matches those ACKs and if the packet occurs within 20ms of the last duplicate ack then this is a fast retransmission”

In other words, no dup ACKs –> no “Fast retransmission”!

“Retransmission” vs “Out-of order”. This is tough one. Dissector source code says: “If the segment came relatively close since the segment with the highest seen sequence number and it doesn’t look like a retransmission then it is an OUT-OF-ORDER segment”.

A little bit general description, isn’t it? I think it all comes to timings and sequence numbers here. Packet 120 came with delay of just 1,3 milliseconds  from packet 118, and it had different (lower) sequence number than packet 118. Perhaps that’s the all logic.

a) What is the lower limit for ICMP Type 3 / Code 4 packets? According to RFC 792 ICMP Type 3 packets must have the next structure:

b) What determines the upper limit for the same packet? It is router’s unwillingness to turn into ICMP black hole. Router doesn’t know, maybe there are another devices between it and the server (in our case) with the same low-PMTU problems. Yes, we know that big DATA packet has come to us successfully, but how can we be sure that our ICMP packet will go back the same way? We can’t know that. 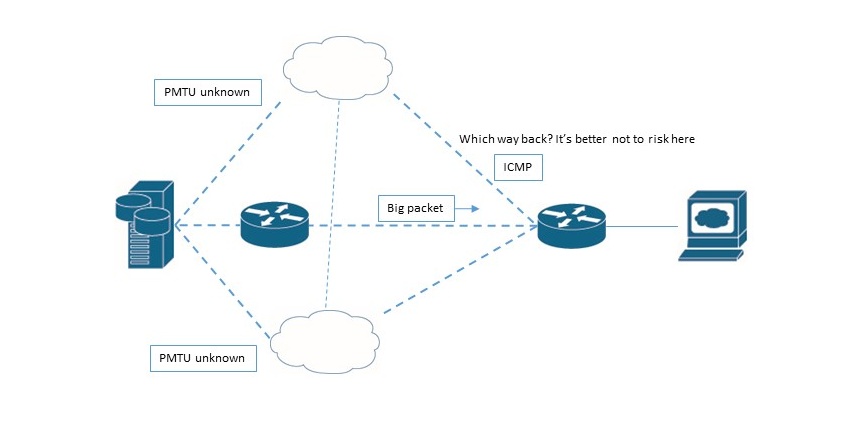 And it’s absolutely not good, if our ICMP packet suddenly will be dropped by someone on the path. If ICMP packet is dropped, it will not be retransmitted. So, our router sets the ICMP packet size to the size that will be definitely forwarded.

But why exactly 576-Bytes L3 size (590-Bytes frame)? Why not 125 Bytes or not the minimum? Hmm… honestly, I’ve not found any explanation for that but I suspect this depends on OS that sends such ICMPs. “Just because we can! Why not? Take as much as possible as far as there is no risk for ICMP packet to be dropped because of its large size” 🙂  Correct me if I’m wrong here. I don’t know the exact answer.

Both my traces have been captured on Mikrotik routers. If you have a possibility, you can check how it happens on your hardware and share this information.

UPD. Christian has added a great comment regarding this question:

RFC1812 Section 4.3.2.3 Original Message Header
Historically, every ICMP error message has included the Internet
header and at least the first 8 data bytes of the datagram that
triggered the error. This is no longer adequate, due to the use of
IP-in-IP tunneling and other technologies. Therefore, the ICMP
datagram SHOULD contain as much of the original datagram as possible
without the length of the ICMP datagram exceeding 576 bytes. The
returned IP header (and user data) MUST be identical to that which
was received, except that the router is not required to undo any
modifications to the IP header that are normally performed in
forwarding that were performed before the error was detected (e.g.,
decrementing the TTL, or updating options). Note that the
requirements of Section [4.3.3.5] supersede this requirement in some
cases (i.e., for a Parameter Problem message, if the problem is in a
modified field, the router must undo the modification). See Section
[4.3.3.5]).”

Thanks for that information!

Our packet carries data (130-Bytes TCP segment), condition (b) is not met, so it can’t be considered “dup ack”. That’s it. There is actually some ground behind such behavior, could you guess what exactly?

Question 4. What do you think, did the packet no. 133 get to the receiver successfully or got lost on the path?

Situation at the receiver after it had emitted packet 132:

And after it had emitted packet 135:

Why have I written those “-1” on the graph? Because Left and Right edges mean different things:

This is the first sequence number of this block.

The bottom line is: data packet 133 with SEQ number 10849 arrived to client and filled some gap in the received stream. But this gap was not the only one in receiver’s buffer, so ACK number in the second Dup ACK (packet no. 135) has not been changed.

Question 5. Assume you are capturing on a server side. The server has just started to upload quite large file. PMTUD has been already completed, PMTU size has been successfully discovered. What do you think, do you have a chance to see it happening again in the same TCP stream (or caused by the same TCP stream)?

Once the sender has figured out PMTU size of 1350 Bytes it will use this size in the current TCP stream, and therefore we will not see PMTUD anymore. Right? Wrong! 🙂  The correct answer is… It depends! On what?

Case (a). We cannot guarantee that our path will be the same all the time. At some point of time just in the middle of the transfer process some router on our path could become unreachable, so dynamic routing protocol will choose another path with PMTU of, say, 1300 Bytes (or whatever other less than 1350 Bytes). Here you go! Catch ICMP Type 3 / Code 4 packet!

“Hosts using PMTU Discovery MUST detect decreases in Path MTU as fast as possible.  Hosts MAY detect increases in Path MTU, but because doing so requires sending datagrams larger than the current estimated PMTU, and because the likelihood is that the PMTU will not have increased, this MUST be done at infrequent intervals.  An attempt to detect an increase (by sending a datagram larger than the current estimate) MUST NOT be done less than 5 minutes after a Datagram Too Big message has been received for the given destination, or less than 1 minute after a previous, successful attempted increase.  We recommend setting these timers at twice their minimum values (10 minutes and 2 minutes, respectively)”.

So yes again, according to RFC 1191 host can increase its MTU size to probe the path. If it wants to do so. It means that we indeed have a chance to see PMTUD happening again.

Your comments to my previous blog post inspired me to laern different OS behavior regarding PMTUD. So, I performed a little test. Here you can see some results I’ve got: 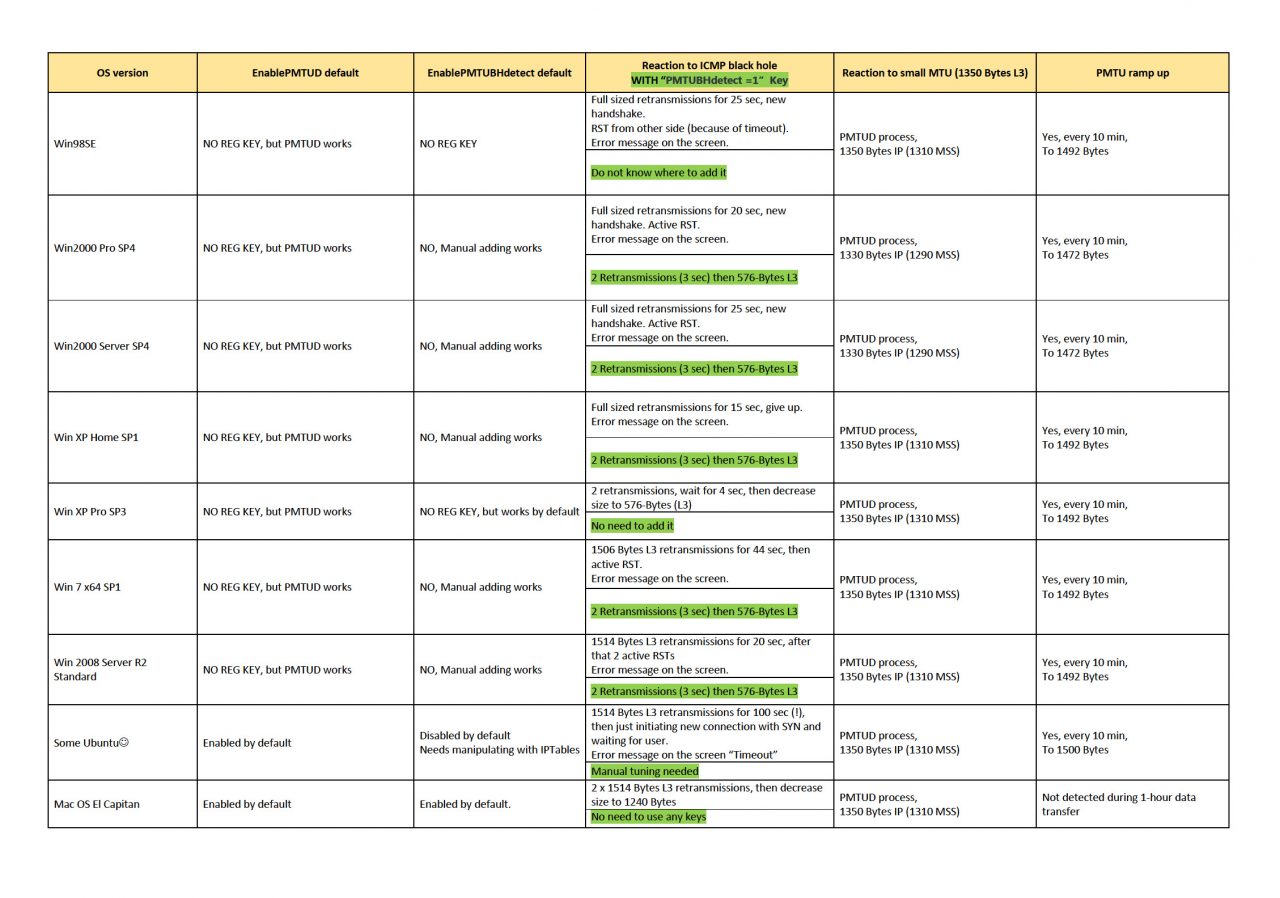 All OS versions I’ve tested actually ramped PMTU size up once every 10 minutes. Mac OS.v.10.something “El Capitan” didn’t do that at all. Also I’ve recorded the behavior when facing with ICMP Black Hole. I hope you’ll find that information useful. Leave request if you want me to test some other OS.

Some interesting observations in there:

So, that was good excersice! As always, you’re welcome to leave any comment!